From the weird and whacky to the well-known and wonderful, research conducted on behalf of Ocean loans has revealed that us Brits love to christen our cars.

According to our study*, one in five car owners have given their vehicle a name. Women are slightly more likely to bring their motor to life with a name than men. And respondents aged 55 and over are half as likely to christen their car as the national average, with 25 to 34-year-olds the most likely.

And what’s the most popular name, we hear you wonder?  The results from our research put ‘Betty’ at the top of the car-naming pedestal. ‘Betsy’ and ‘Lucy’ occupied the second and third spots.

The complete top 10 break-down of titles are:

Many aren’t quite so mainstream, though. Some of the more obscure names that came out of our study included: Frapuchini, Frugal, Gladys, Hoopla, Lord Thaodin of Rohan, Nooka the Nook, Snozzles, Custard and Toadzilla.

From the promiscuous – ‘BJ’ and ‘Passion Wagon’ – and the prominent – ‘Beyonce’, ‘Pelligrino’ and ‘Nemo’ – the odd and obscure car names given by Brits are plentiful. 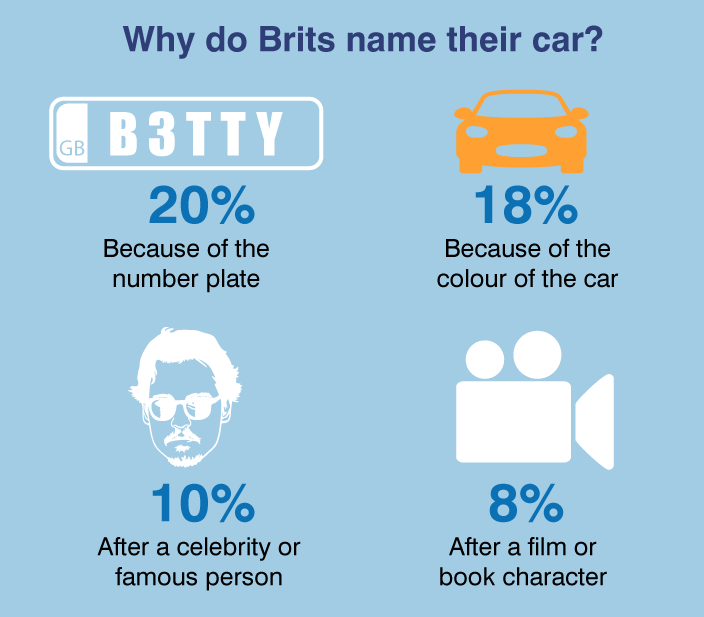 Of those who have given their car a name, one in five (20%) said they did so because of the vehicle’s number plate. Men (26%) are much more likely to name their car based on this than women (15%).

Marginally fewer respondents (18%) said they named their motor because of its colour. Those aged between 25 and 34 (30%) are most likely to pick a name based on colour, and 45 to 54-year-olds are least likely.

Furthermore, one in 10 said they christened their car in homage of a celebrity or famous person – men (16%) are more than three times as likely to name their motor after a well-known personality as women (5%). Age-wise, 25 to 34-year-olds are most likely to name their vehicle after a celebrity or famous person, and 45 to 54-year-olds are least likely.

Last but not least, 8% of those who gave their car a title said they did so after a film or book character. 18 to 24-year-olds are most likely to name their motor after a fictional character, and 35 to 44-year-olds are least likely.