Do Brits tip too much out of politeness?

If you’ve ever apologised when it isn’t necessary or said you thought a meal was delicious when, in reality, it was a struggle to finish - you’ll know that being polite in awkward situations is in our DNA as Brits.

We decided to take a look and see if this can have an effect on your outgoings, asking 1,000 Brits a series of questions to determine whether we’re a nation of over-tippers or if our politeness stops at our pockets.

We asked the British public about their tipping habits in a selection of businesses where tips are most common to see how widespread this trend of polite payments is.

Restaurants are the biggest beneficiaries when it comes to this behavioural trend. 37% admitted to tipping at them, even when the service was subpar. This was closely followed by hairdressers at 32%. 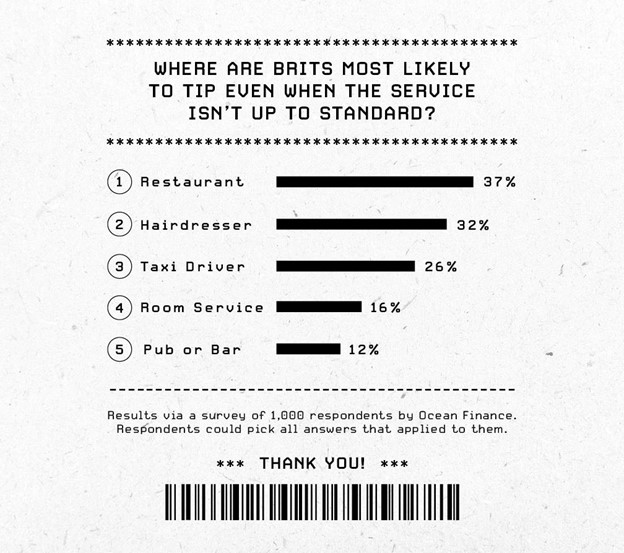 Our survey revealed that the people most likely to tip over £30 are aged 25-34, placing them squarely within the millennial age bracket. That’s one less thing for people to blame on them at least! In fact, almost 3/5 (58%) of 25-34-year-olds spend £30+ per month tipping. 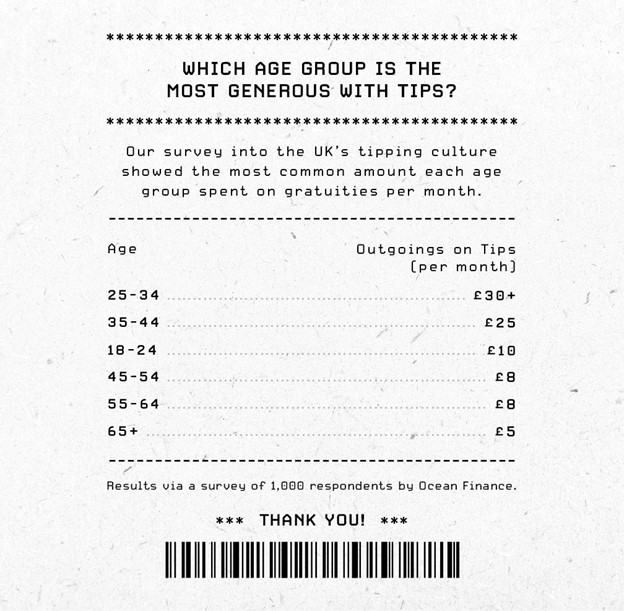 Other age-based tipping trends we uncovered include the fact that, despite having less disposable income, those in the 18-24 age bracket tip an average of £10 per month.

When compared to those aged 44-54 where the most common amount is £8, and 65+ where it drops again to £5, it seems like Brits get less generous with tipping as they get older.

With people still acclimatising to life in the new normal, we asked whether having experienced lockdowns and restrictions would leave people more likely to become generous tippers.

21% of respondents said that they believe they’ll tip more, while 12% said they would be tipping less than they did before Covid hit.

The remaining 67% told us that there will likely be no change in their tipping habits, which means there’ll be plenty more politeness-driven spending for businesses to look forward to.

‘I spent over £1,000 on tips before Covid - including bad haircuts and raw restaurant dinners’

Serial tipper Abigail Taylor, 32 and living in London, says she was spending over £1,000 a year on tips before Covid - even when the service was terrible.

‘I thought tipping was always the done thing, regardless of how good the service was. When I moved to London, I started going out for dinner and drinks often with friends, colleagues or clients. Everyone would tip automatically when the bill arrived, so I started to as well.

‘There have been a few times that I didn’t really want to tip, like when I didn’t like my haircut, or once I was served raw chicken in a restaurant! But because everyone else tips, I thought I had to as well. It wasn’t until Covid began that I realised how much I had been spending on tips.

‘In the future, I’m only going to tip if I really like the service so I can spend more on rewarding the people who deserve it.’

Financial expert explains the right ways to tip for your budget

If you feel like you spend too much on tipping out of politeness, even if you don’t like the service, don’t be afraid to cut back.

On the other hand, if you really enjoyed the service, you can still show your appreciation without breaking the bank. Finance expert Sarah Neate, Editor in Chief at Ocean Finance explains how.

For more financial insights and studies into spending across the UK and beyond, check out the Ocean Finance blog. You can also find advice on managing your money, from ways to save on food to tips to improve your credit score.