British public 'out of touch' with cost of everyday items

Most of us really don't know the price of milk, petrol or lager

With the major political parties at odds over whether the 'cost-of-living' crisis is over or not, a new survey has shown that many people in Great Britain are in the dark over the true cost of several everyday goods.

Mortgage, credit card and secured loan broker Ocean Finance commissioned a survey* to find out if shoppers know the average price of five different everyday items, before comparing these answers to the actual average price**. The results were as follows: 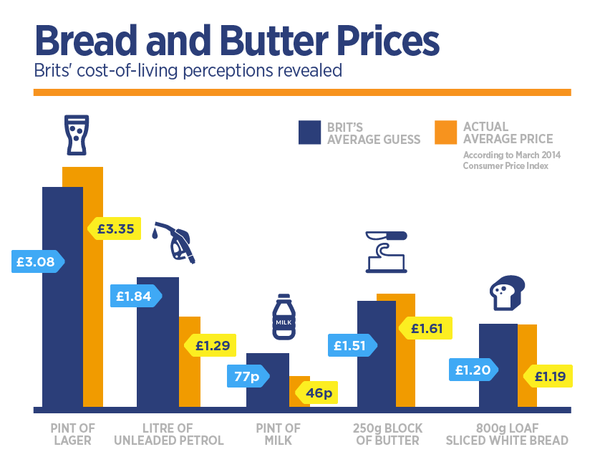 The most startling finding is that the British public believe a litre of petrol is over 50% more expensive than it actually is. Men (£1.79 per litre) were much closer to the true cost of petrol than women (£1.95 per litre), although they were both still a fair way off the actual average price of the fuel.

However, fuel wasn't the only liquid to confuse Brits, as they also massively overestimated the price of a pint of milk. Despite the fact that the average cost of the dairy product has remained fairly steady at between £0.44 and £0.46 since October 2008, according to historical Consumer Price Index data, the survey found that the perceived cost is over £0.30 higher. In fact, residents of London believe that a pint of milk costs more than twice what it actually does - perceiving its price tag to be £0.98.

A pint of draught lager down the local had the opposite effect with respondents, as they perceived it to be £0.27 cheaper than it actually is. There were stark regional variations in the responses, with those in Southampton and London expecting to pay much more for a pint than those in Glasgow, Edinburgh and Liverpool.

Thankfully, respondents managed to get the cost of bread and butter about right. They were just a penny below the average price of £1.19 for a block of butter, while the perceived price for an 800g loaf of sliced white bread was just £0.10 higher than its actual cost. However, this slight overestimate might be explained by the fact that the February edition of the CPI showed a sudden £0.09 drop in the actual average price of a loaf.

Ian Williams, spokesman at Ocean Finance, commented: "We speak to mortgage and loan applicants every day, and it is noticeable how they can be considerably out when we ask them to estimate how much they spend on items such as groceries. Our survey suggests a possible reason for that – which is that we really don’t know what many commonly bought items actually cost.”