Bank of Mum and Dad

Do you get involved with your son or daughter’s finances? If that’s the case, you’re not alone.

For generations, young people in this country started work safe in the knowledge that, before long, they’d be earning more money than their parents would’ve done at the same stage in their life. Unfortunately, that run now appears to be over.

Worse off than the generation before them, due to stagnating salaries and the increase of living costs (house prices especially) millennials have had to become more financially reliant on their parents to help them get by. Whether it’s a hand in getting on to the property ladder, clearing debts or even staying at home for longer than expected to get their finances in order, becoming financially independent is taking longer than ever before.

Keen to discover just how much support is now required, Ocean Finance decided to look into generational finance, to help shed further light on just how complex and far-reaching this issue is. 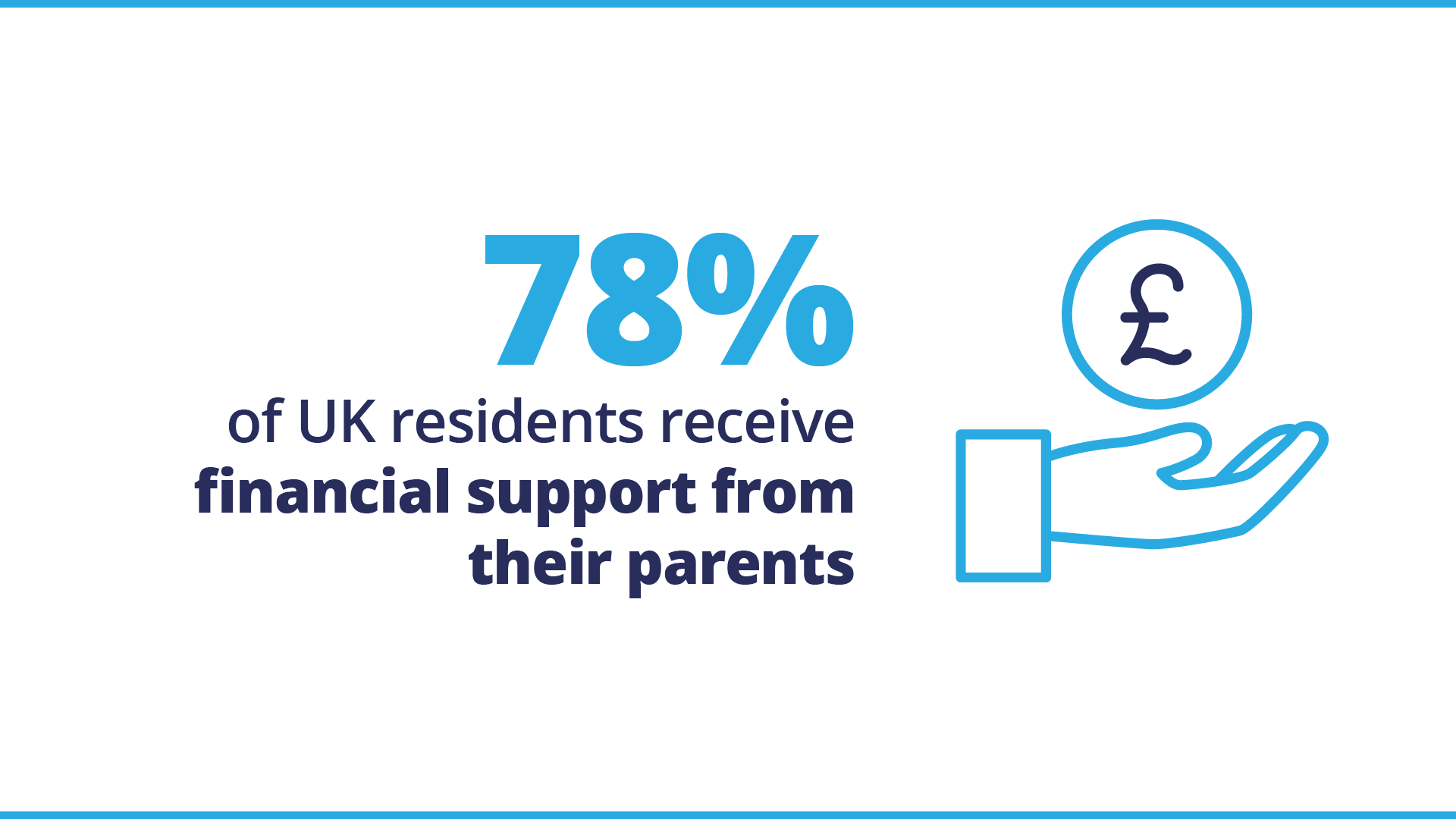 Regular Visits to the Bank of Mum and Dad

Far from an isolated issue, 78% of all UK residents receive financial help from their parents and, of those, 50% are being helped as regularly as once a month.

Whether it’s credit card repayments, a loan that needs managing or a mortgage that’s straining their finances, it’s younger people who’re struggling the most.

Surprisingly, it’s the 25 to 34-year-olds who are the most financially dependent on their parents (82%), but are closely followed by 18 to 24-year-olds (81%), who might not yet have reached the commitments that those past their mid-twenties are familiar with. Obviously happening far more often than we might’ve imagined it to, 1 in 4 Brits (25%) receive financial support from their parents at least once a week, while a further 8% receive financial support from their parents every day. 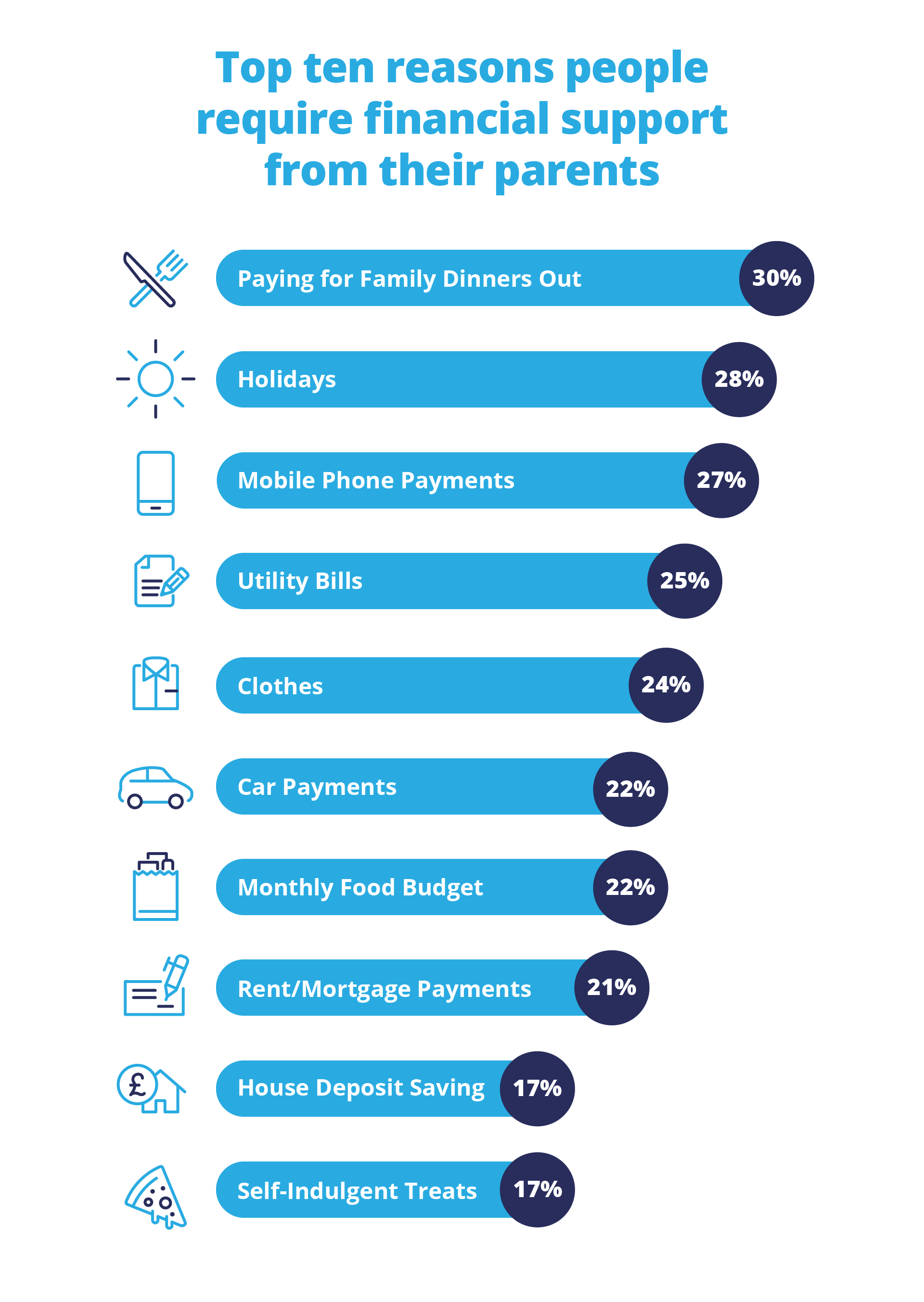 It’s not just the serious commitments that parents are giving their children help towards though, with the top 10 reasons given for parental support including family meals out (30%), holidays (28%), clothes (24%) and self-indulgent treats (17%). 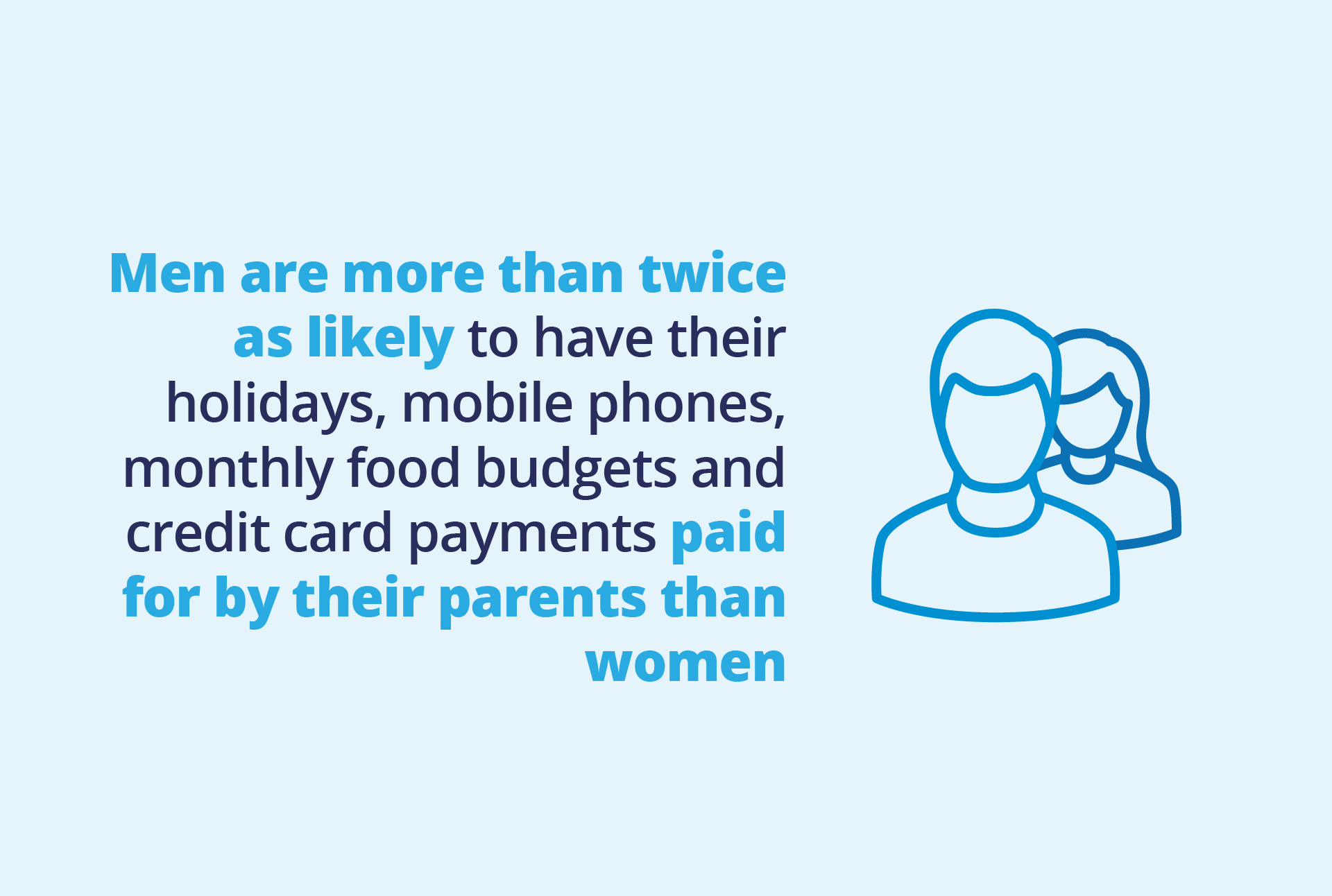 Within these figures, it’s revealed that men (69%) are slightly more dependent on their parents than women (67%) although the difference isn’t all that significant.

It’s always awkward to ask, “how much?”, but in this case, the results do provide a fascinating insight into the level of support needed by millennials in the current financial climate.

At the highest end of the scale, for example, 165,000 Brits (2.5%) are receiving over £5,000 per month from their parents, while at the lowest point, 20% regularly receive between £50 and £100 per month. By far, the most common amount comes from the £50 to £500 per month bracket, which 42% of young Brits receive – which gives us a clearer view of how much additional cash the majority of young people are in need of.

In these arrangements, is the money expected to be paid back or not? Is the money provided as part of a loan understanding, or is it a gift? 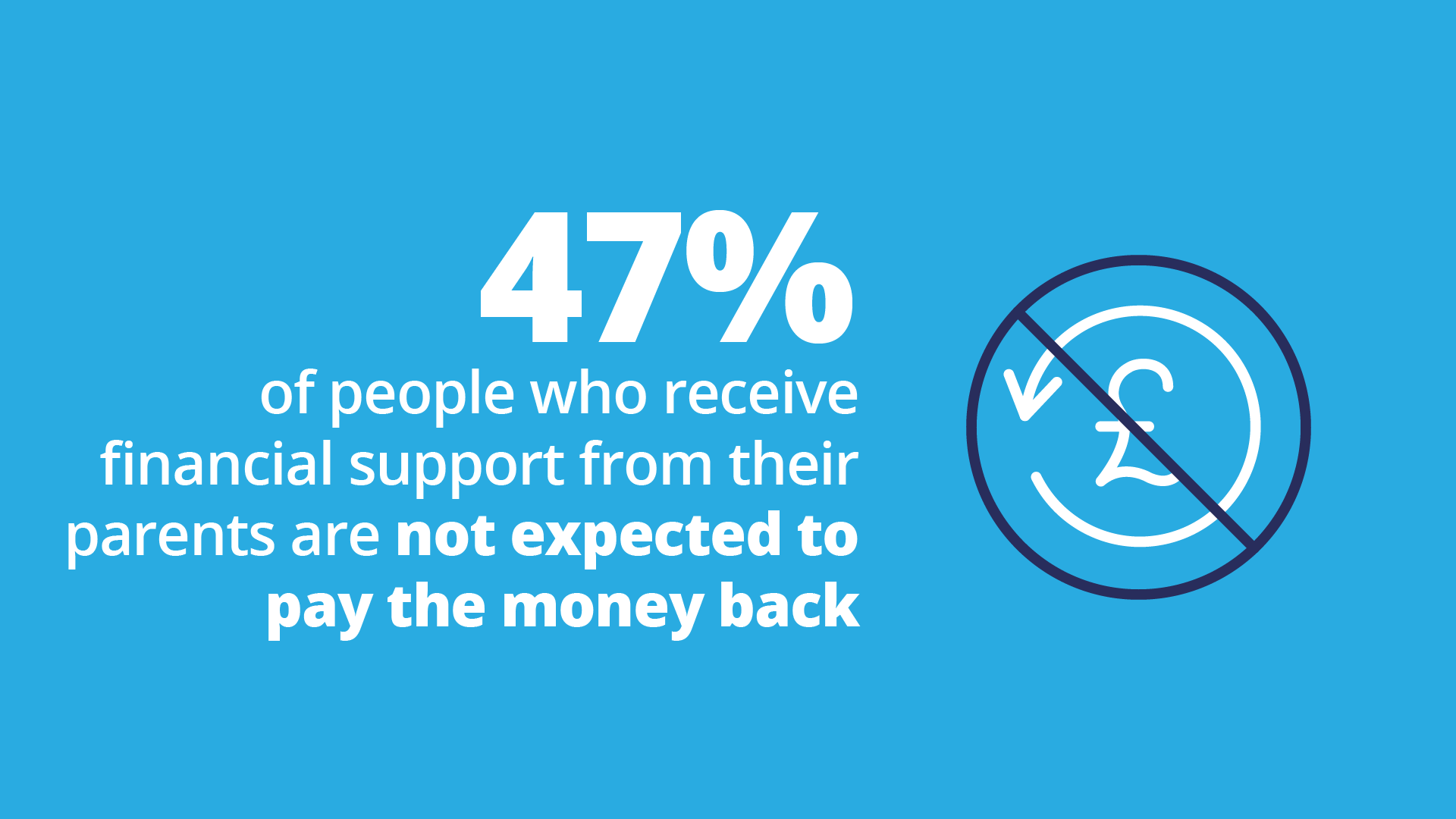 Interestingly, even though we now know that slightly more men are receiving financial help from their parents than women,

Keeping an Eye on Your Spending

Given that they’re helping with finances, it seems somewhat understandable that some parents have started to keep an eye on the spending of their kids, with 1 in 10 Brits having their monthly spending reviewed at home. 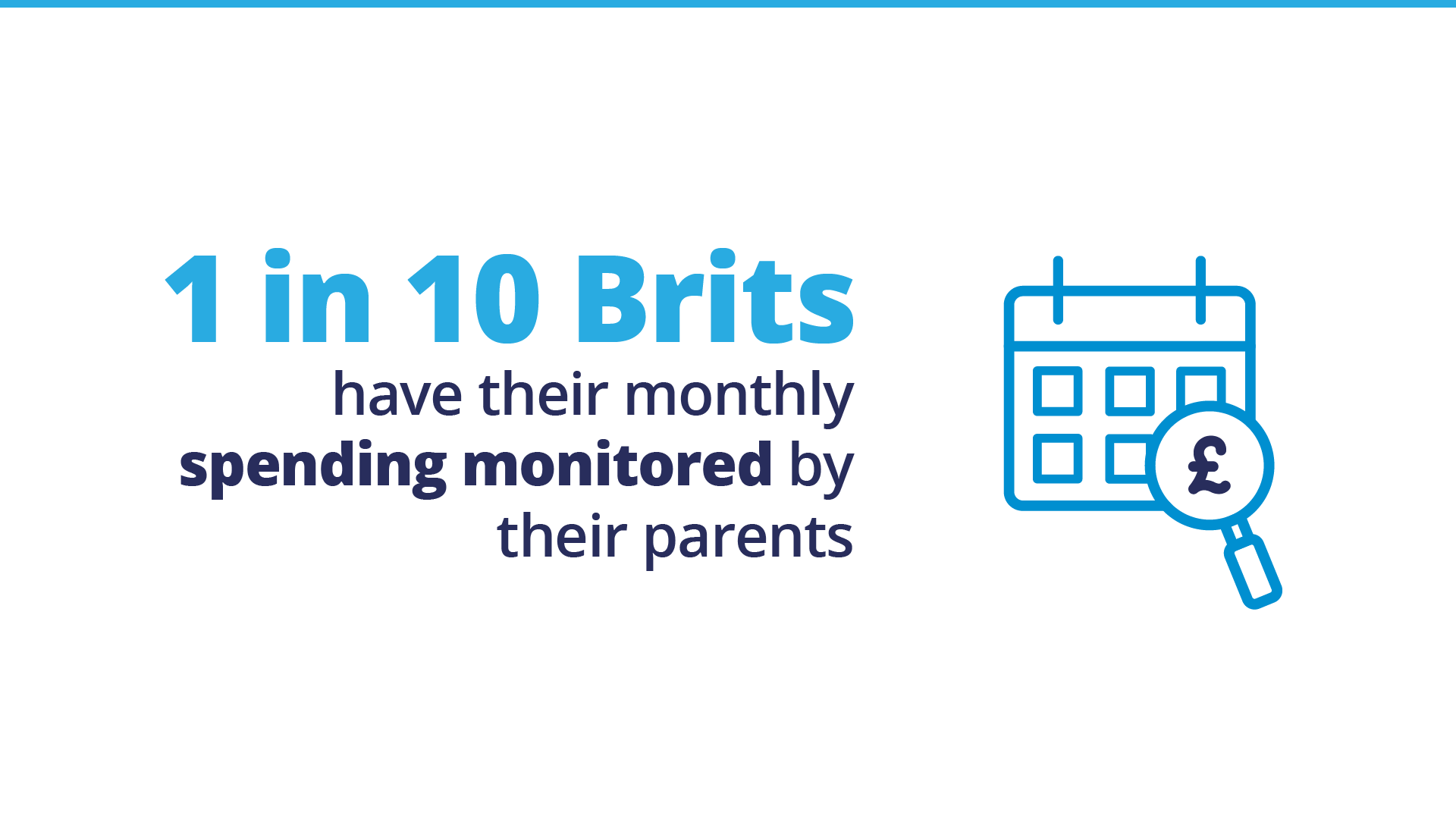 It’s not just by providing money that parents are being of help, either, but saving money, too. With 20% of Brits living rent-free at home and a further 38% reliant on their parents to provide free childcare, families are lessening the financial burden in a variety of ways. Additionally, 15% of Brits still have their parents clean up after them, tidying their property on their behalf.

Again, there’s a gender difference, with 15% of men having their spending monitored by their parents, while almost 1 in 4 British women live at home without paying rent.

What Have We Learnt?

Being financially independent as a young person in this country hasn’t been this difficult in generations, and with economic uncertainty something that appears to be lingering for some time yet, there’s no clear point at which we’ll see an upturn in fortunes. Independence is an important factor in becoming an adult, but as it becomes more difficult to practically obtain, we’re likely to see parents continue to help their children manage their finances for longer than was traditionally the case in the past.