We now have so many ways to manage our money and keep track of what’s going in and out of our accounts, in addition to contactless payments.

This technology takes the effort out of remembering important details - so it’s little wonder Brits can end up being a bit financially forgetful.

We conducted a survey of 1,000 UK residents to find out whether they had a good grasp on their personal finances and the results speak for themselves.

52% couldn’t remember the last payment they made

We posed a range of questions about personal finance management to see how well the UK can stay on top of their day-to-day spending and other common outgoings. Not so well it turns out, with over half of Brits not keeping close tabs common outgoings. Over half (52%) of respondents couldn’t remember the last payment they made on their debit or credit card.

Letting these figures slip your mind can have negative implications on your ability to effectively budget which could leave you having to live frugally nearer the end of the month or, if you’re not careful, overspending and landing yourself in financial difficulty.

1 in 3 Brits have forgotten they're paying for unused subscriptions

It’s not just one-off payments that are causing Brits problems. 30% of respondents said that they’d overlooked a subscription which was still coming out of their account, only realising months later. Of that forgetful bunch - 1/3 of those surveyed (32%) - the most often missed subscriptions were on entertainment services like Netflix or Spotify. 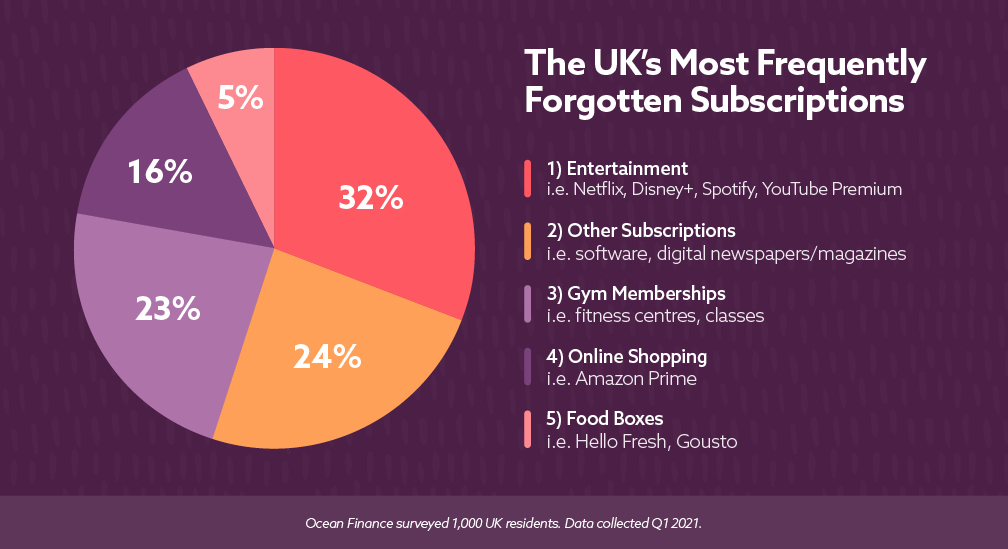 Brits spend an average of £46 per month on subscriptions, which soon adds up over time (£552 each year to be exact). This amount should be concerning if you’re guilty of continuing to pay for services you’re not actually using.

39% didn’t know exactly how much they get paid

It’s not just our outgoings that cause us to pause for thought. You would think that, as you’re putting in the hours to earn it, you’d have a good idea of how much you’re paid for your work.
However, when we asked whether Brits knew exactly how much they earn, a shocking 39% said that they weren’t sure.

It’s probably time for them to get the payslips out as, aside from being good to know the precise figure in terms of how much you must budget day to day, it can also be crucial to successfully applying for loans and other finance products.

Another important work-related outgoing shared by many Brits is their pension contribution. With its importance to your quality of living in later life, it’s quite startling that 65% of respondents told us they don’t know how much they’re paying into their pension.

There are a lot of Brits, over 3/4 in fact, who could do with keeping an eye on their credit. 77% told us that they don’t know their credit score. The importance of a good credit score can often be overlooked.

But keeping on top of it can really help you in the long run with benefits including:

In real terms, according to TotallyMoney*, here is how a low credit score can affect you financially:

With so many accounts and details to keep track of, you can be forgiven for having to think twice before logging into an online banking or shopping service.
38% of respondents said they relied on auto-fills to remember their passwords. While this is convenient, it can also leave you vulnerable to fraud. There are examples of auto-fill forms being used to harvest user data and even financial details by imitating a reputable site’s login page and storing all the information you input.

PINs and CVVs are slipping our minds

It’s not just the volume of details we’re expected to remember, but also the changing trends in how we’re spending. While one of the most basic pieces of financial information you’d expect Brits to hold onto would be their card’s PIN number, the shift towards online-first purchasing has meant there isn’t as much emphasis on remembering those four magic digits.

39% of respondents told us that they’d experienced a total blank on their PIN number, likely due to the convenience of contactless payments as well as it not being needed to shop online.
An interesting point raised during our research was that 41% of those surveyed said that it has become easier to remember their CVV (the 3-digit number on the back of payment cards) than their PIN because of our increased reliance on online shopping.

So, what chance do we have of remembering all the details on our payment cards off by heart? Not much according to 75% of respondents, who said they wouldn’t be able to recall the card details needed to buy online without checking.

Women have a better money memory overall, as do people over 45

When we split the results by gender, things were close when it came to a side-by-side comparison. Overall, we’ve found that women are better at remembering personal financial details than men.

Across our questions testing Brits on their money memory, it was a very close thing. On average, 40% of female respondents felt confident in their ability to recall amounts spent and their financial information as opposed to 38% of men.

Respondents aged 54-65 were better at recalling their financial details

It wasn’t just gender that had an impact on people’s recall, we found that it appears to improve with age. Based on their answers to the yes or no questions in the graphic above, the age groups who claimed to remember the most about their finances were 45-54 (46%) and 54-65 (47%) which is a 10% difference compared to respondents in the age groups from 18-44 (av. 36%). The worst age group for recall was 25-34, with only 35% confident in their recall.

The most financially forgetful regions revealed

After establishing who won the battle of the sexes when it comes to money memory – we took a closer look at whether there were any significant differences in financial forgetfulness based on whereabouts in the UK people live.

As it turns out, there is quite a gap between the most forgetful area of the UK (Northern Ireland) and the region with the best recall (North East).
Here’s each region’s forgetfulness percentage based on their answers across the survey questions. 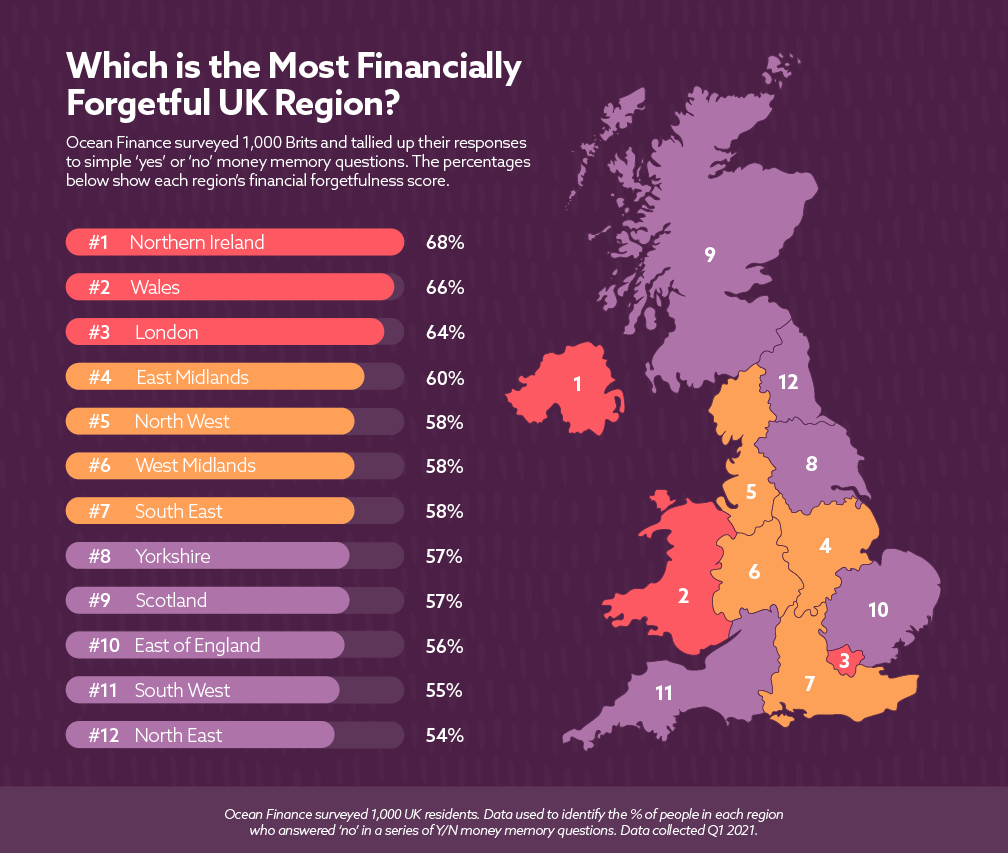 8 ways to improve your money memory

If you think you’d be counted amongst the most financially forgetful Brits, that doesn’t mean there aren’t steps you can take to improve your money memory.

Here are our top tips to keeping on top of your finances:

There are also a wide range of free budgeting apps available (i.e. Money Dashboard, Emma and Cleo) which can help you keep on top of your finances.

For more insights into the UK’s spending habits and how to keep your credit score on track, make sure to check out the Ocean Finance blog.